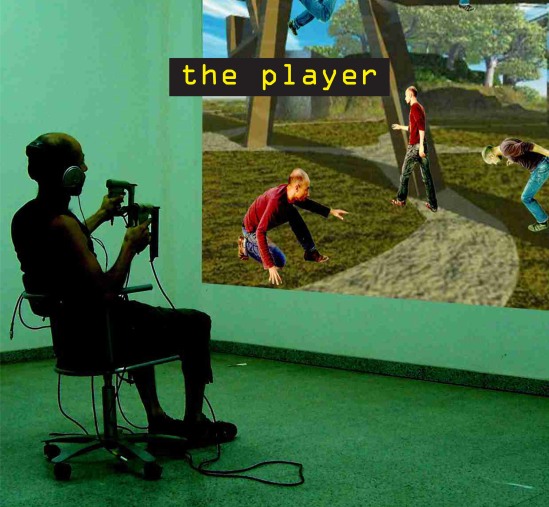 A colleague of mine has received a grant from Centro Parraga in Murcia to do an interactive research project. Loosely based on two definitions of the word player, both a theatrical performer and a person who participates in some game, it stages the artist as the protagonist in a strange computer game. Spectators and public would turn into users and players. Ideally.

It became clear very early that two art nerds can’t make a computer game, complete with an avatar, 3D surroundings and interaction between the two. This is a two month project. We settled for making it in Flash, hoping that we could control that within Max. You can do this, of course, if you know how to ActionScript. And though I really like the name, I don’t have the energy to learn a new programming language now.

So we stepped back and decided to use some old code. Old code is a drag, but it allowed us to play loops of video by pressing keys on the keyboard. With Xpadder, a small program that converts gamepad signals to keys, we get the desired interaction. To generate sound and samples I use Max. This process is backwARTs.