I have been teaching the second year students in Digital Design at IED Madrid. The workshop was called Alternative Interfaces and we were using MouseMan to interact with animations that the students would make in Flash.

The exhibition opened last Thursday and will run for one more month. From the 17th of May two new and improved versions of Mapping Madrid are also scheduled next door. Nice. 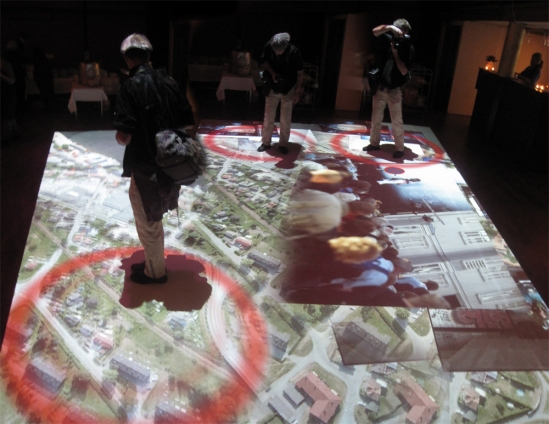 This is an image of Dag Jensen, the photographer that has done most of our performance photos, standing in our installation, taking pictures of a picture he took in 2006, with the audience in front of a 6 x 5 meter poster of the photo he took in 2005 of a girl running away from fire. The sequence has a dizzying effect, it reminds me of learning strange new words in college, like mise-en-abyme meaning, “placing into infinity” or “placing into the abyss”.

First of all the two MouseMan projects in Porsgrunn and Madrid are almost opposites, in Madrid it was inside the Altamira Palace, all made of marble, with a cool atmosphere and plenty of time for people to interact.  In Porsgrunn it was inside the popular Folkets Hus, at the end of a 2 hour theatre walk in the city, together with lapskaus (traditional norwegian food) and entertainment. The visitors had become audience and as an audience they where in a theatrical time mode.

We tried making interactive things for Stedsans in 2007 with little success in the field, so we ended up performing the interactivity. With the Tesla Coil in 2008 we dropped the interaction altogether and did a Pythonesque mad professor routine which worked well. This year, because of reproduction and MouseMan being our new project, we went back to full scale interaction. It seems that Stedsans and interaction doesn’t belong together.

But then a challenger appears. Kids. The kind of people that’s not content with sitting politely at the table and listening about the good old days. We made an easy to understand interface, when you move the red circle follows, a 5-year-old could get it, but it was difficult to grasp for the pre-computer generation. The future for MouseMan could be a large 3D version of PacMan. 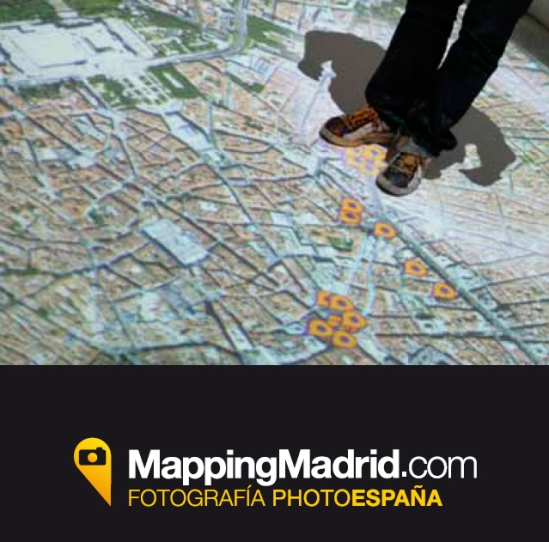 The summer holidays have finished and IED Madrid have made a catalogue of our project. Get it here:

We are currently in Porsgrunn at the Stedsans festival updating our MouseMan project. In this small town we have access to more equipment and the infrastructure is of a happy-go-lucky type,  so v2.0 will be better, faster and longer. There is no hacked web camera, but a newly bought IP security camera. Not one projector, two of course. And why not use six par cans with RGB filters instead of buying one expensive IR light.

So the project is upgraded, but and this is why we ask for your help Internet, when we started testing our two projector vertical set-up, we found no solution to spanning the desktop over two monitors with a flash program in full-screen. Our dualhead2go can pivot the screen, we have downloaded Pivot Pro and searched up and down on the net, but still can’t find a solution. There was three entries in forums addressing the same problem, no one has answered yet. Come on Internet, this is relevant for everybody.

How do you put one projector on top of another and get their desktops to function as a whole, just like it is in horizontal set-up? 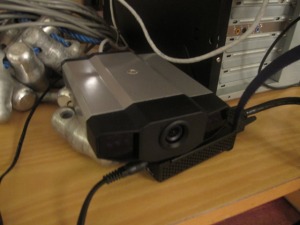 We finally got the documentation together, so here are the photos from the making off and the opening day. This was one crazy project, we did our set-up in May in between the workshop we held, then one month later when it was inauguration time we finished the installation remote desktopping from Norway. Maybe for the first time I had the feeling of telepresence as we instructed the people at IED to walk in the room, chatted in WordPad and tried to calibrate the machine.

The installation is still running for one more week, upload your holliday photos from Madrid here.

El Mundo had an article about it.

This process was an Internet success story, later in the real life production we ran into a series of failure.

During a presentation of our shopping-trolley robot at Universita La Sapienza in Rome some years ago I met David Dalmazzo. He does a lot of interactive works and explained me briefly how he used infrared cameras in several dance productions. This was the wonderful world of background elimination.

So when we where approached by IED Madrid to build an installation for the PHotoEspaña festival, the time had come to put the theory into practice. A quick search in the big library revealed a way to hack webcams into infrared cameras. The technical department did it in 5 minutes, while the performance department used a staggering 5 hours. Once inside the infrared part of the spectrum we started experimenting, finding light sources and filters, calibrating the software and preparing for the on-site setup.

The actual construction included memorable moments like using one day to build lights that we couldn’t use, buying infrared diodes at this very special shop only to discover that they gave us cancerous ultraviolet ones and so forth…