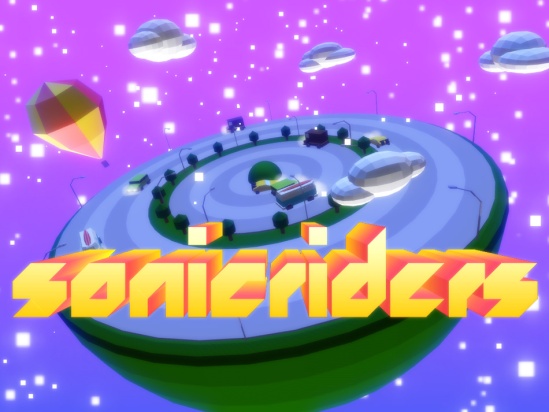 Again I found myself at Medialab-Prado for a workshop, this time an intensive 48 hours of Global Game Jam together with Eduardo Moriana. We decided to join the jam to further our research with the kinect and our remake of Space Invaders.

El Pais had an article about it. 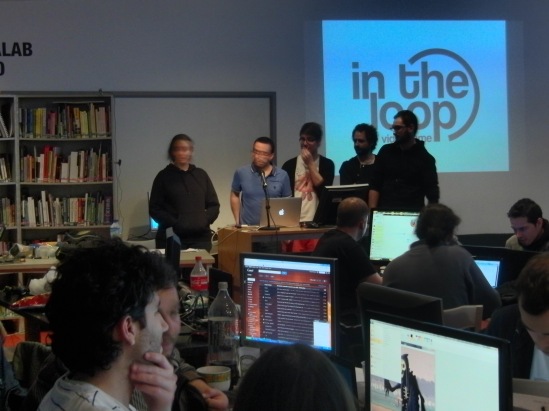 The Game Jam usually starts with a word that the ideas should revolve around, but this year it was an image of a circular snake biting its own tail. We then had 20 minutes to brainstorm concepts that could be presented and from which the teams would be made. Apart form a very loose idea of using the kinect to control a noisy feedback that should be harmonized into an Ohmmm, I was kind of blank. Luckily several other people had good ideas and I decided to join a project that intended to make a game that would add small loops together to form a musical score. That was the idea.

The team consisted of Enrique Hervás (Head of Game Department), Rob Díaz (3D Art) and myself (Certified Game Tester). We started discussing the essence of what we wanted and investigating its possibilities, it’s related to Guitar Hero, but we are not making a Keyboard Hero.
After looking at examples of similar things (SolarBeat) and discussing the use of a musical score sheet turned into a roller coaster, or MIDI as a note generator and synchronizer (not that easy inside Unity and with only 40 hours until deadline it was a no go), we ate dinner discussing the finer aspects of game development and went back to Medialab to start building the core mechanics.
They where: object A moves along a line, when close to object B the player can press a key so that object B moves and a sound is triggered. The two experienced programmers had this up and running within an hour so we decided to end the day early. Now the game only lacked a theme and some further development.

That night I played around with the game mechanics in my head before falling asleep, trying to visualize the music score roller coaster or even a music box game of some sort. But when I strolled in a bit late around 10 there had been a radical change. The game theme was a race circuit with 8 tracks and the game was taking shape rapidly. From scratch Rob had already built a crude model of the world and was designing the cars. Enrique was in deep concentration with the code.
So, I started searching for sounds with this new theme in mind, but it was difficult as all the visual aspects were not there yet. When evening came and we put it all together for the first time, it became clear that the soundscape I had chosen did not fit our game and a retake of the whole thing was needed. I took the last metro home, while the others stayed to code all night! It makes you think about the amount of coffee that is built into every game. 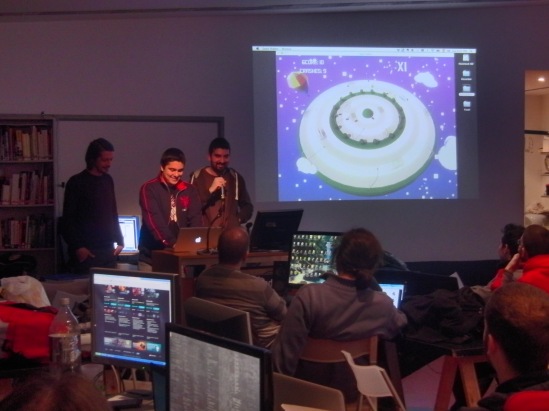 The next morning I decided to get there early and arrived at 9, though only hours left before the game needed to be uploaded, and found to my surprise the game almost finished. It really had become its own game during the night, Rob even found some new sounds to try out. I sat down and cut, pasted, stretched and looped all the sounds to fit this new game.
The hours passed in a frenzy. Code was being closed as we spoke and some of the ideas had to be discarded. The final changes where not implemented, the game had no quit button, but it was more or less presentable. Then the judges arrived, and we left our game running and finally started walking around to see the other groups. 14 games, more or less finished, in 48 hours. There was a presentation of all the projects and then the winner was announced: SONIC RIDERS! 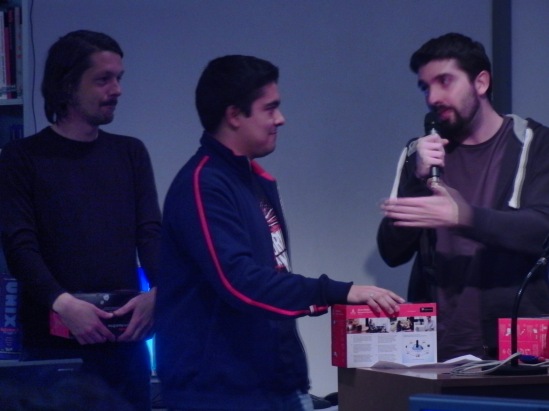 Epilogue. So I started work on Monday tired of working the whole weekend. But, but, my teammates managed to ask if I had been paid for making the game when I showed it to them. That is not the correct attitude.

I have participated in several workshops at Medialab-prado before, but usually with artistic projects, and they fail a lot. I find this acceptance of fail one of the strengths of the place, but with the game geeks it was an whole different level of win.

Soo, last year Bieber killed steampunk (we have flirted with it, but consider ourselves more atompunk) and this year starts with Suckerberg paying homage to The Hacker Way. In a short text inside Form S-1 REGISTRATION STATEMENT that was just released, this is the same type of document that gave us Google’s “Don’t be evil”, we can read:

The word “hacker” has an unfairly negative connotation from being portrayed in the media as people who break into computers. In reality, hacking just means building something quickly or testing the boundaries of what can be done. Like most things, it can be used for good or bad, but the vast majority of hackers I’ve met tend to be idealistic people who want to have a positive impact on the world.

The Hacker Way is an approach to building that involves continuous improvement and iteration. Hackers believe that something can always be better, and that nothing is ever complete. They just have to go fix it — often in the face of people who say it’s impossible or are content with the status quo.

Hacking is also an inherently hands-on and active discipline. Instead of debating for days whether a new idea is possible or what the best way to build something is, hackers would rather just prototype something and see what works. There’s a hacker mantra that you’ll hear a lot around Facebook offices: “Code wins arguments.”

Hacker culture is also extremely open and meritocratic. Hackers believe that the best idea and implementation should always win — not the person who is best at lobbying for an idea or the person who manages the most people.

What can we say? We agree with this, but seeing it in a document signed by MORGAN STANLEY J.P. MORGAN GOLDMAN, SACHS & CO does not feel right. The nerds have had their revenge and sold out. It is 2012 folks, we need to crack it up and let some light in.